Depicts a Jewish concentration camp from an aerial viewpoint. the 'Lo-Fi' aethstetic is important in this piece as the rough application of materials suggests a 'vintage' feeling of a 1930's/40's newspaper or aerial view image. The minimalistic aesthetic gives the image more poignancy as it becomes stark and haunting in it's subtlety. Is part of the 'Arbeit Macht Frei' series of works. 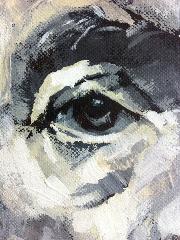 Well Billy, I find your approach towards this theme remarkable. It highlights the charakteristic speciality that makes this genocide and massmurder the most gruesome in history. The industrial way of killing. The way it’s done in a slaughter-house. Without emotions, without hatred, without conscience. There are many ways to approach this theme and as a German I spent lots of time thinking about it. I never really liked the way it was dealt with in those memorials. Emaciated corpses in bronze. For it’s not so much the amount of victims ... Stalins machinery killed as twice as many ... but the way the killing was done. Therefore it’s impressive for me to see that you try to give your work the touch of blueprints that only contain technical instructions and no emotional ones. Realizing that there has been no chance of appealing, no chance of begging for mercy, no chance to give rise to the slightest human reaction, for one cannot talk to an assembly line like industrial equipment, is an important insight. So I want to encourage you to continue this kind of work. It has touched me. Thank you.

P.S. I wouldn't call it a "Jewish" concentration camp but a German one to be precisely.

Heartbreak, a target and a bullet trail and a man inconsolable. His head in his hands. Regretting, doubting, reflecting, lamenting.

The title is Latin for rape. Depicting a discarded dead leaf on its twig. The piece contains metaphors of sexual assault. Beauty destroyed.

Sometimes I wonder what women make of this... when we males (the collective perpetrator) "contemplate" the act of rape. Can we really talk about beauty destroyed (whatever that means) when rather shouldn't we berate the defilement of the aggressed individual, that person within us all (female or male)? Is rape just another manifestation of this, or only woman can truly (and exclusively) answer the question?

Depicts the gas chamber pipes from a Jewish concentration camp. The minimalistic aesthetic gives the image more poignancy as it becomes stark and haunting in it's subtlety. The piece is also imbued with the history and memory of those who inhabited these spaces, where they slept, worked and ultimately died, but without showing or giving any implication of the figures themselves. Thus forcing the viewer to use their imagination of what occurred in these rooms. Is part of the 'Arbeit Macht Frei' series of works.